Serendipity in the realm of science and technology is an unexpected process in which a scientific discovery or a technological advancement seems to occur by pure chance. But a new study by CERN, Esade Business School, and the Technical University of Denmark shows that there is much more than chance to serendipity. Conditions can be created by forming innovation ecosystems, where serendipity is somehow systematised – leading to streamlined scientific breakthroughs that ignite deep tech innovation in Europe. The findings, based on a large dataset from 170 ATTRACT technologies, were presented at the ATTRACT Conference: Igniting the Deep Tech Revolution, held on 22 September 2020.

The study examines the ATTRACT project, a €20m-funded initiative within the Horizon 2020 Framework Programme that aims to systematise the discovery and development of breakthrough applications for detection and imaging technologies rooted in the instrumentation that pushes the frontiers of fundamental research.

“The large dataset from the 170 ATTRACT technologies allows us to view serendipity in an unprecedented manner and identify how big science research can be used in unexplored ways for commercial applications,” said Jonathan Wareham, professor of Information Systems at Esade Business School and co-author of the report Systematising serendipity for big science infrastructures: the ATTRACT project.

Based on the experience of how 170 breakthrough technologies were used to develop new scientific applications, the report reveals the main four mechanisms that can trigger serendipity to ignite deep tech innovation in Europe and beyond: 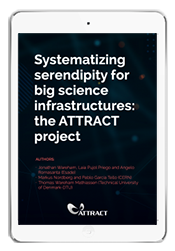 1. The first mechanism to trigger serendipity (used by 41% of the ATTRACT projects) is combining technologies from different research domains to produce new applications, such as using a photonic system for liquid biopsy or merging gas-sensing and high-pressure technology to create new gas sensors. Under this category, technologies from adjacent or distant domains are combined with varying degrees of integration.

2. The second most used mechanism to trigger serendipity is improving technologies from previous research to make them more effective (31% of the projects). This mechanism involves re-examining previous research so that new features can surface that have not been previously identified or explored.

3. The third mechanism to trigger serendipity (used by 27% of the projects) is applying existing technologies from one domain to a new research field or application area. This category coincides best with the previous notions of serendipity – finding new uses for existing things. New uses potentially emerge by exposing a technology to a field where it has not been previously used.

4. The fourth mechanism to systematically activate serendipity (accounting for 14% of projects) involves the application of machine learning or artificial intelligence to augment or find new uses for existing technologies.

“It is a widely accepted wisdom that increasing the collisions between different innovation actors promotes the chances of serendipity. With its novel constellation of actors, resources, design, and governance, ATTRACT should be seen as an experiment in innovation policy,” said Pablo Tello, one of the co-authors of the report and section head of Development of EU projects and initiatives at CERN.

“ATTRACT should be seen as an experiment in innovation policy”

The ATTRACT Conference brought together researchers, investors, entrepreneurs, and European innovation policymakers to explore how breakthrough technologies will change the future and which model of innovation ecosystem Europe needs for scaling up promising ventures for global markets. “The ATTRACT project has been genuinely ground-breaking. It is the first time that we have connected science and innovation so openly in Europe,” said Director General of Research and Innovation at the European Commission, Jean-Eric Paquet, at the ATTRACT Conference.

“We need to take more risks if we want to give life to potentially impactful ideas,” said Jean-David Malo, Director of the European Innovation Council Task Force at the European Commission. He added that the EIC will soon be announcing a new major investment decision to fund promising technologies and accelerate the development of deep tech innovation.

Investing in the upcoming synthetic decade

What will the upcoming synthetic decade be like? Amy Webb, one of the world’s most sought-after futurists and CEO of the Future Today Institute, addressed this question together with investors, researchers, and entrepreneurs. “During this decade, we are transitioning from siloed technologies in areas like physics and biology to interdependent, interdisciplinary systems. The work being done at ATTRACT is so important,” said Webb in her keynote. She provided examples of breakthrough ATTRACT projects that are helping push the field of synthetic media and synthetic biology forward.

The ATTRACT model of deep tech innovation is featured in a dedicated online workshop on 24 September 2020 (3:15 CEST – 4 pm CEST) in the European Innovation Council Hub of the European Research and Innovation Days.

Big research organisations and experts in business management have been working together in the EU-funded ATTRACT initiative to co-create a European deep tech ecosystem for detection and imaging technologies. This is a new European model of open innovation that can become an engine for jobs and prosperity. For two years, 170 projects were each awarded €100,000 of funding and mentorship by ATTRACT to develop disruptive ideas and turn them into viable commercial applications. Interdisciplinary teams of students from across Europe (led by Aalto and Esade Business School) applied design-thinking methodologies to turn some of ATTRACT’s breakthrough projects into valuable products and services.

Participants in the ATTRACT conference explored how these technologies could revolutionise global markets and society in diverse disciplines (such as healthcare, biotech, robotics, and self-driving cars) in the upcoming decade. Funded by the European Union’s Horizon 2020 programme, ATTRACT aims to help revamp Europe’s economy and improve people’s lives by creating products, services, companies, and jobs. The ATTRACT project has received funding from the European Union’s Horizon 2020 research and innovation programme under grant agreement No 777222.

Get latest news from ATTRACT

How can Europe create more innovators?

Making a success of deep tech: what the data tells us