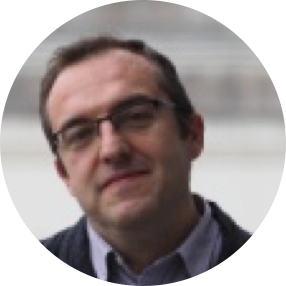 Dr. Paolo Mutti grew up and studied in Turin where he obtained a B.Sc. degree in astrophysics. In 1997 he obtained his PhD in nuclear astrophysics with the highest distinction, at the University of Gent. As a physicist he worked at the Institute for Reference Materials and Measurements of the European Commission and also at the Delft reactor.

In 2000 he joined the Institut Laue-Langevin as a scientist in the Nuclear and Particle Physics group, leading a wide range of scientific activities on nuclear structure and gamma ray spectroscopy. In 2010 he became head of the Instrument Control division, with responsibility for developing specific hardware and software solutions to perform the scientific program on ILL instruments. He also develops hardware in collaboration with industrial partners, one of the ILL’s key industrial liaison activities. Since 2017 he is also leading the scientific computing division which is responsible for providing data reduction and data analysis tools to the ILL users.

As a scientist he is mostly involved in nuclear spectroscopy experiments and he has recently participated in the construction of a new Ge detector array dedicated to the measurement of nuclear level schemes and nuclear level lifetime in the ps region.

He has been co-author of around 120 publications, and regularly he supervises numerous PhD students and fellows. In the recent years, he has participated in a number of European projects such as CRISP, SINE2020 and BrightnESS and he is a member of the Attract PCB.